Master Class with Roger Deakins: I like films that focus on characters 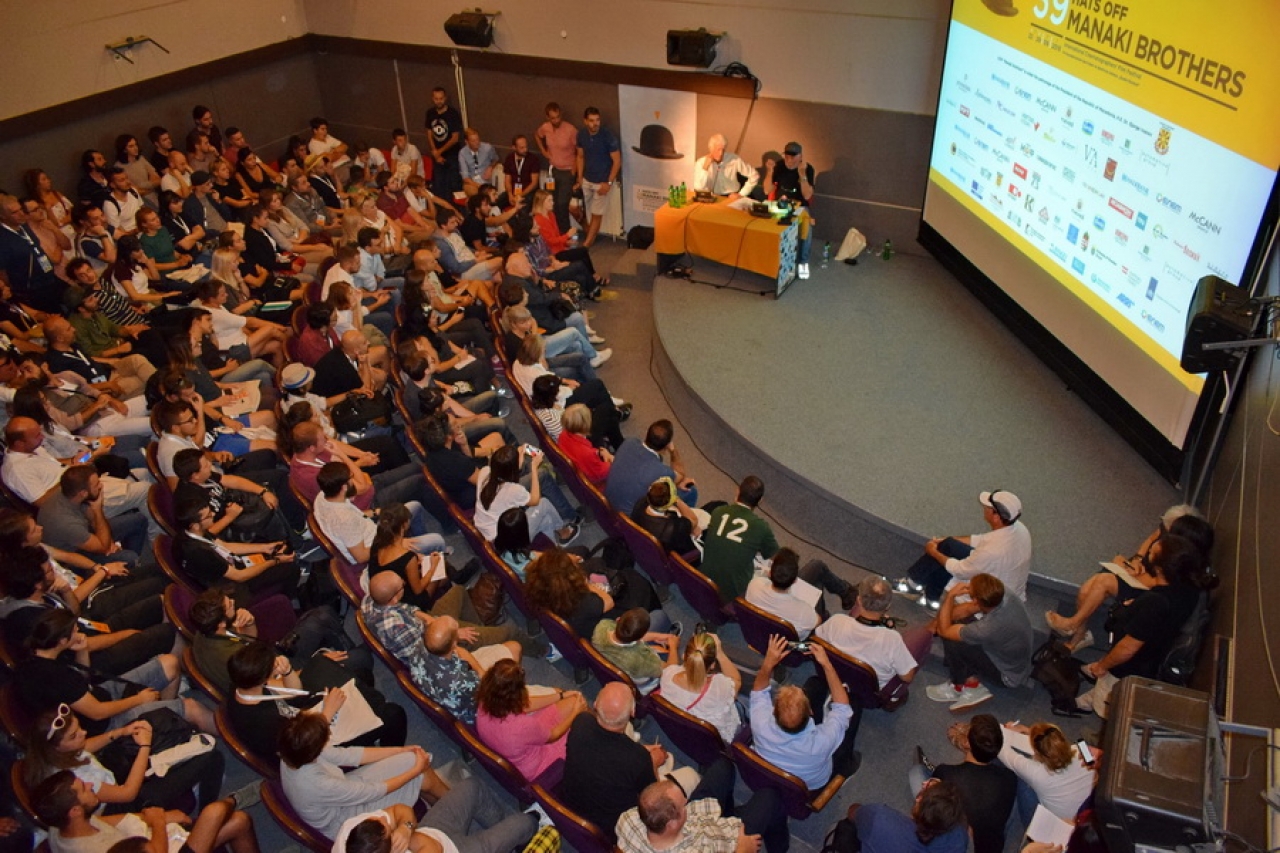 September 24, Bitola – At today’s press-conference, the crew from the film Noble Lies was introduced, the film that was screened last night in honor of Claudia Cardinale, the recipient of the Special Camera 300 for Outstanding Contribution to World Cinema Art.

A surprise for the journalists today was the appearance of Claudia Cardinale herself, alongside Paolo Rossi, the film’s producer, and Emanuela Zaccherini, producer.

The festival director Gena Teodosievska introduced the crew, pointing out that the film Noble Lies, filmed in 2017, caused great interest to the public, and Cardinale added that she very much liked her role in the film.

-I liked the script and I reacted enthusiastically to it because it was also a debut film of the director Antonio Pisu. I play an old lady in the film, one married to an older man and I have an older brother, but I have to say that I was surrounded by very good actors and I think that it is quite important for a film to have a good acting crew. The cinematographers left a big impression on me because they are very important, and I favor the directors Visconti and Bolognini. Otherwise, I don’t have a favourite cinematographer, I have good collaboration with all of them, Cardinale said.

-No, no, I am not a film diva, I am a normal woman! – Claudia Cardinale kept saying.

Paolo Rossi gave his gratitude to the given space at the festival and said that he had picked Claudia for the film because she is a very special person.

-She lives a normal life, not the one of a star and that is what the people around the world like. I am thankful for the support as well, because she does know how hard it is to make a debut in Italy with an independent production and she wanted to help us. She is not like Sophia Loren and the other stars. The most famous Italian film critic said for this film that, considering the fact that it is very hard to make an independent film nowadays, it as piece has overcome that obstacle because it is different from the rest of the films of the Italian cinematography, Rossi said.

-Paolo is an exceptional person, a professional in every way and I think that the film will be here to stay, having some new influence on the film world, Zaccherini said.

All the members of the film crew were unanimous on their loving feelings of Bitola, the festival’s organization and the fascination with the mosaics of Heraclea and the Macedonian cuisine.

The cinematographer of the film Transit, Hans Fromm, shared the experience from the film’s recording. This film was screened last night as part of the official competition program. Considering the fact that the film’s plot is in Marseille, where refugees from World War II and nowadays meet, the guest spoke about the refugees’ situation in his talk with the selector Blagoja Kunovski – Dore.

-It is a recent story, it is the negative experience of contemporary Europe which now has to deal with the refugees. Germany wasn’t so strict in terms of the policy towards the refugees, but right-winged parties are starting to appear and they are against the refugees or they want to stop the flow of emigrants. I have to say that what happens in Germany is that the people are generally not leaning towards excluding the migrants or some sort of neo-fascism, Fromm said.

The director of the film Deaf Child, Alex de Ronde, in his talk with the selector of the documentary program Marija Dzidzeva, spoke about the motives for shooting the film and dealing with the problems of deaf children.

-The main motivation to make the film Deaf Child was the fact that the biggest part of the other deaf children films are a lot more focused on the handicap that has to be fixed by the doctors or the teachers, but my main goal was to showcase the deaf child as part of a cultural minority, with its own language and culture. I simply wanted to say that I am concerned for the future of deaf children. All around the world there are schools for deaf children that are closing down, they have to go to regular schools and it is not easy for them there, Alex de Ronde said.

Master Class with Roger Deakins, recipient of the Golden Camera 300 for Lifetime Achievement

The open talk with the cinematographer Roger Deakins, the Academy Award winner with Blade Runner 2049 which opened this year’s edition of Manaki Brothers, literally overflowed the Small Hall of the Center for Culture in Bitola with film professionals, journalists, festival guests, domestic students and ones from abroad. The talk was moderated by Nigel Walters from IMAGO (European Federation of Cinematographers, with 53 national associations and over 4300 member cinematographers).

Deakins went back to his beginnings in film, first of all as a student at the London National Film School in the early 70s, coming from the small town of Torquay in Southwest England.

Before starting to shoot feature films, Deakins recorded documentaries, so he shared his experience working with that genre.

-When shooting documentary films, one needs to exercise the eye to see what will happen next, opposed to the feature films, where you can do rehearsals and retake scenes a couple of times, Deakins says.

At the start of the talk, he mentioned his experience with a technique of desaturation (lowering down the intensity of the colors) on the film 1984 (a screen adaptation of the George Orwell novel), saying also that that is the film feature-length film that used that technique. Anyhow, no visual effects were used in the making of the film 1984, but all was made with a combination of various off-screen techniques.

-We played with some techniques which allowed us to showcase something that nowadays is only done by a push of a button, Deakins pointed out.

He said that one crucial role of the cinematographers in the film’s making is to give the actors the space to do their part.

He did his first American film with the director Bob Rafelson, the film Mountains of the Moon, a film in an ironic-comedy style, but he thinks that that film didn’t turn out that well.

-I think that I wasn’t the right person for the work on that film and with that director, Deakins stated self-critically, adding that the people that work on a film sometimes just don’t fit together.

The moderator Walters pointed out the film The Shawshank Redemption as one of his favorite films, and he asked Deakins why is it not amongst his own favorites.

-I imagined that the film’s story will be portrayed in a more brutal and realistic manner, but to me it was maybe a little toned down, Deakins thinks.

In terms of his experience on the Cohen Brothers’ film Fargo, Deakins remembers the idea of filming it in some sort of a documentary-like manner, being more observative of the characters.

-Fargo is a brilliant film, but it was quite a technical challenge for me. The Cohen Brothers knew exactly what they wanted and almost all recorded material was used up, Deakins said.

The fruitful collaboration with the Cohen Brothers continued with the films O Brother, Where Art Thou?, The Man Who Wasn’t There, No Country for Old Men…

-In O Brother, Where Art Thou?, a technique of digitalization with timing of the material was used for the first time, and it took a long and hard work. We wanted to achieve a look of a painted photography, Deakins explained.

He pointed out that The Man Who Wasn’t There is one of the best films he has worked on.

-The Cohen Brothers ingeniously put the film together, Deakins said, pointing out that the cinematographers and the actors understand each other very well on the film sets only with a look.

-We were lucky that there were digital effects 12 years ago, so we could record scenes from the burning oil separately and combine them with the scenes where the characters actually were, Deakins explained.

The festival laureate pointed out that he likes films because of the characters.

-The character portrayed by Ryan Gosling in Blade Runner 2049 seemed somehow empty to me, so I felt some pity for that character, Deakins said, also adding that the film Skyfall seemed to him somehow different from the rest of the James Bond serial, exactly because of the bigger focus on the characters.

The MEDIA desk of Macedonia held the 1st Close-Up Gathering in Honor of International Cinematographers at the 39thICFF Manaki Brothers. The gathering was attended by a large number of domestic and international cinematographers, producers, directors, as well as this year’s Golden Camera 300 laureate Roger Deakins and the Special Golden Camera 300 laureate Claudia Cardinale. At this 1st Close-Up Gathering, a representative of the Delegation of the European Union in Skopje, Freek Janmaat, had his addressing, congratulating this initiative of the MEDIA desk of Macedonia, which is up to set the start of a series of so called Close-Up gatherings. These gathering will be held during the whole year with the goal of bringing together various audio-visual sector professionals, exchanging experience and solutions to exact problems. Every Close-Up will be devoted to a different theme and will host actual domestic and foreign professionals from the separate areas in the sector supported by MEDIA. Of course, the base of these gatherings will be the support of the Creative Europe MEDIA program and the MEDIA desk of Macedonia will always stimulate the Macedonian applicants to come to financial means for easier realization of their ideas and the projects they have come up with.

This year’s festival edition will see the screening of 7 films supported by the Creative Europe MEDIA program, 3 of which are in the official selection. Amongst the 7 films is the documentary In Praise of Nothing by the Serbian director Boris Mitikj, who comes to the festival with the support of the MEDIA desk of Macedonia to hold a workshop with the students on September 25 at 1PM (Center for Culture in Bitola, Small Hall). The film In Praise of Nothing got financial support of EUR50.000 from the TV Programs call by MEDIA, which is open for independent European production companies whose business plan includes collaboration with at least three TV companies from multiple member-countries of the MEDIA subprogram.

The children’s program starts tomorrow at the ICFF Manaki Brothers, and a Master Class with the cinematographer Christian Berger and the production designer Christoph Kanter titled Creating Visual Style in Haneke’s Films will be held as part of the First Films First festival program.