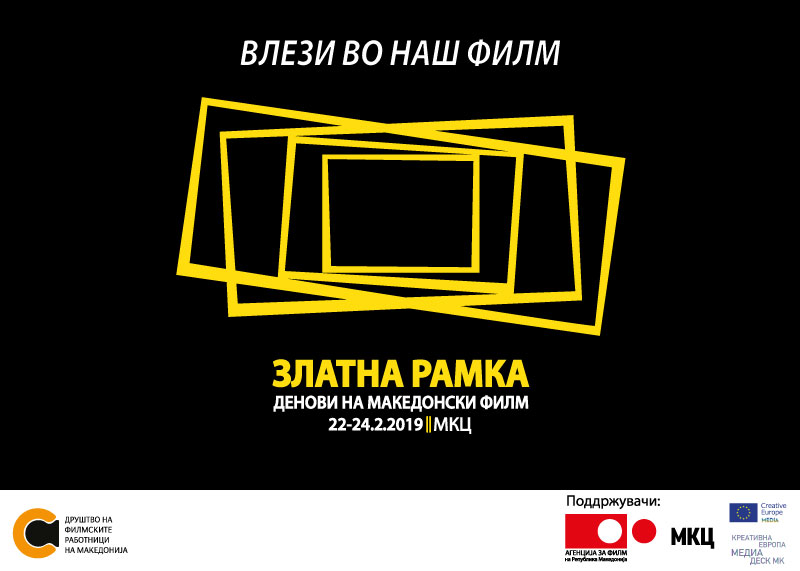 “Golden frame” is a film revue organized by the Macedonian Film Professionals Association, which represents insight and display of the completed Macedonian films in one calendar year. “Golden Frame” was first held on 22 – 24 February 2019 in the Macedonian Youth Cultural Center, in the Frosina cinema.

Its primary goal is to report on the completed films and to show the Macedonian audience, without selection, a clear and transparent image of the film activities, funded by the Film Agency of the Republic of North Macedonia, that is to say from the budget means.
This type of representation of the national cinematography is performed worldwide and it represents a part of the support and education of the domestic audience of its cinematography. Most of these movies are not shown in cinemas, and this is an excellent opportunity to show them before our audience.

“Golden Frame” takes place for several days, dependent on the scope of the Macedonian production completed in one calendar year. The regular Assembly of the MFPA, held at the beginning of every year, is an integral part and marks the beginning of the Film Revue “Golden Frame”. At the ceremonious part of the Assembly, the program is presented, the films that are shown and the events that are organized as a constituent of the revue. Moreover, in the frames of this manifestation, the MFPA organizes a Ceremonious awarding of honor prizes for outstanding film actor/actress, author and film professional, thus paying their respect to the film guild, aiming toward improvement of the dignity of the film professionals.