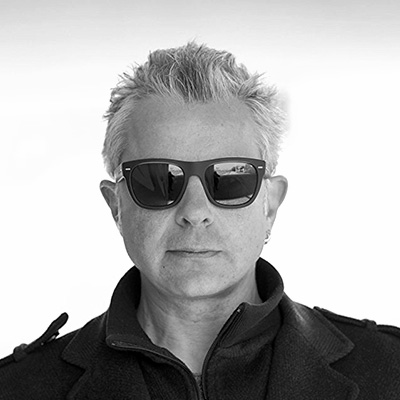 He started his director’s carrier with the subversive-musical serial “Subway” (Sabvej), from which, his first movie surfaced, titled “NEP”, which premiered at the London Film Festival. In 1997, he filmed the short movie – The Clock, which gained special recognition from the Council of Europe.

He is the author of the documentary films titled Kaval (Flute) and Gajda (Bagpipe), shown at many festivals around the world.

In 2004, he filmed “Bugs” (Bubachki), which was nominated for a Golden Bear at the Berlin Film Festival and won the prestigious prize Golden Leopard at the Festival in Locarno, as well as many other world recognitions.

In 2007, his first feature film titled – Upside Down (Prevrteno), was premiered at the Karlovy Vary Film Festival and won the prize for Best Director at the Valencia Festival of Mediterranean Cinema, as well as the East of West Award by the jury at the MOVEAST Festival in Hungary.

He is the author of the serial videos titled “Macedonia – Timeless” (Makedonija Vechna), which were awarded at the International Tourism Film Festival, Art&Tur in Portugal, as well as the author of tens of marketing campaigns, marketing videos, corporative and special films.

His second feature film, “The Piano Room” (Soba so Pijano) premiered in October 2014 in the USA, at the prestigious Chicago International Film Festival.

Currently, he is enrolled as a postgraduate student at the Faculty of Philosophy at the SS. Cyril and Methodius University in Skopje, and is planning a new feature film.

In the area of television production, Ivanov directed the TV series “Our Neighborhood” (Nashe Maalo), “Five Plus” (Pet Plus), “Prespav”, “Insider” (Insajder), as well as many other TV coverages, documentary films and music videos.